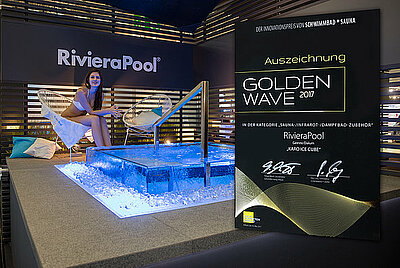 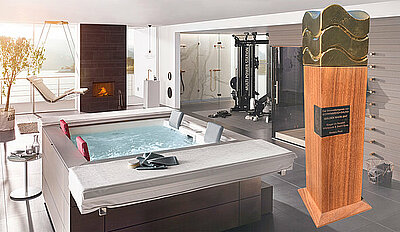 Geeste, June 2017 - In spring, the magazine "Schwimmbad & Sauna", Europe's largest pool & spa magazine, awarded the "Golden Wave" innovation prize for groundbreaking developments in the field of pool and wellness technology for the seventh time. RivieraPool received three such awards in the categories "Swimming Pools", "Whirlpools" and "Sauna/Infrared/Steam Bath Accessories". Three awards are granted in each of the eight categories. The "Golden Wave" is being awarded every two years. "Winning no less than three awards in one year is a great honour for us and proves that we are successful with our work," says Marketing Director Uwe Rengers enthusiastically about the event.

Winner in the "Whirlpools" category

With its portable whirlpool models "Strato 2.0 and 2.3", RivieraPool won the first prize in the "Whirlpools" category. The new Strato models come with an isolating hardtop cover for the adjoining chill-out, which means that a daybed is already included. The Daybed, a padded lying surface made of outdoor vinyl material, is so stable that it can carry two people lying above the pool. A patent is applied for the new chill-out zone. With this product, RivieraPool is setting new trends in the whirlpool market. It is oriented around current trends in outdoor living and optically focuses on a straightforward, purist design language, as it is also represented in contemporary architecture and pool design. The jury is convinced and awards the "Golden Wave" to RivieraPool and its "generation of whirlpools representing the new feeling of living".

RivieraPool has also won a Golden Wave Award for its work in the categories "Swimming Pool" and "Sauna/Infrared/Steam Bath Accessories". MLine prefabricated pools, on the market since the end of 2015, are, like all RivieraPool prefabricated pools, made of durable GRP material and are already fitted with mosaics or ceramics in the factory. Special feature: Not only the pool shell is made of multi-layer epoxy acrylate, but also the mosaic or stone surface is glued and grouted with epoxy resin. This results in a homogeneous material structure, with all layers of the pool having the same surface tension. Movements during transport or temperature differences are compensated for by the elasticity of the pool and the joints remain seamlessly tight. This gives the pools an especially long service life. "Not only does the MLine look good, it also saves time and money," the judges state.

With the "Karo Ice Cube" sauna diving pool, RivieraPool has developed the perfect addition to any modern sauna area. The cold dipping pool is serially equipped with generous steps and the treads and floors are anti-slip profiled. A partial overflow channel drains displaced water and serves as a safety overflow. " The visual highlight is an acrylic glass rim that leaves the water content in the surroundings like a block of ice and thus visually evokes the association of cooling-down," concluded the jury about the new plunge pool.

RivieraPool would like to thank all members of the magazine "Schwimmbad & Sauna" and the jury of the "Golden Wave" and hopes to be among the winners again at the next event in 2019.

From pool dream to dream pool

Our pool dealers near you

Our partners and ProPartners are at your disposal throughout Europe. Close to you, competent and RivieraPool trained. This gives you and us the security of a good investment in the long term. Make an appointment at the location and jointly sketch out what is possible.

The quick way to your own pool RivieraPool Configurator